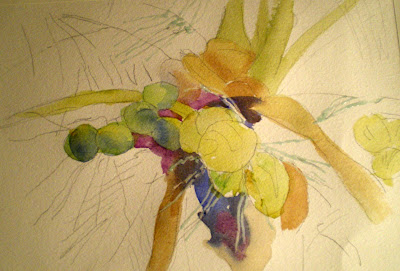 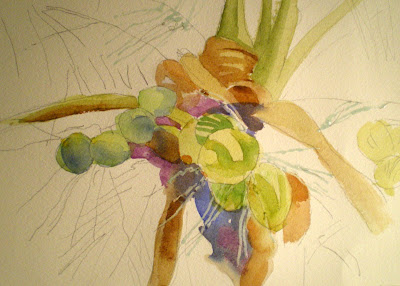 I previously tried the middle and the freehand way with my coconut palms; last night I began on a version using more planning (or as much planning as I am capable of; I don't think I could ever put the time and effort into a very detailed, photorealistic type painting; I don't have the space or equipment, either). 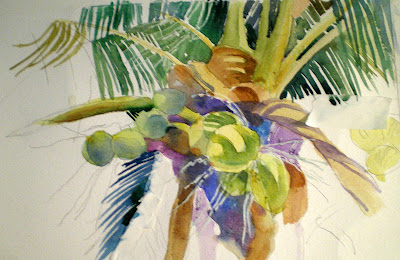 Today I stared to add some of the palm fronds. The areas that are painted now are going to be the dark, detailed areas. I hope to be able to restrain myself in the other areas, leaving some space, and maybe some whites (though, since I didn't leave any whites on the coconuts themselves, I'm not sure I want white spaces competing with them ... well, I'll have to wait and see).

Barbara mentioned her cherry tree, which made me think of this poem by A. E. Housman, whose poems always appealed to me, being susceptible to the elegiac:

TO AN ATHLETE DYING YOUNG

The time you won your town the race
We chaired you through the market-place;
Man and boy stood cheering by,
And home we brought you shoulder-high.

To-day, the road all runners come,
Shoulder-high we bring you home,
And set you at your threshold down,
Townsman of a stiller town.

Smart lad, to slip betimes away
From fields where glory does not stay,
And early though the laurel grows
It withers quicker than the rose.

Eyes the shady night has shut
Cannot see the record cut,
And silence sounds no worse than cheers
After earth has stopped the ears:

Now you will not swell the rout
Of lads that wore their honours out,
Runners whom renown outran
And the name died before the man.

So set, before the echoes fade,
The fleet foot on the sill of shade,
And hold to the low lintel up
The still-defended challenge-cup.

And round that early-laurelled head
Will flock to gaze the strengthless dead,
And find unwithered on its curls
The garland briefer than a girl's.
I plan to to finish and post this tomorrow. Then it's off to Delaware for a week of painting with Shelby, Lori and Betsey.

The greens in your painting really send me.

I liked reading about your switch to English. Yay.

Enjoy your week away!

Laura, this was more of the angle that I told you I had done with my coconut palm... although mine is more coconuts than tree, Maybe I'll post it one of these days, I live in Florida so they are close to my heart. I love your version but then again I love all your versions. Art Heart

Ah, painting the thinking mans game.You are doing such a nice job.I can't imagine the amount of planning that goes into photo realist paintings?

Oh, God, I love that poem, too! When Meryl Streep read it (as Isak Dinesen) in "Out of Africa," I was thrilled. I'm fascinated watching how you're doing this--you have real discipline to keep at it as you are. Wonderful!

God, I love that poem, too, Laura! And I'm glad you took that detour. I'm certain it was good for the soul. Lovely painting, and you are so dedicated, going at it from all directions. Good for you!

God, I love that poem, too, Laura! And I'm glad you took that detour. I'm certain it was good for the soul. Lovely painting, and you are so dedicated, going at it from all directions. Good for you!

More and more amazing with each brush stroke. Ditto A Brush With Color's comment about discipline too.
Get thee to Delaware, go and have a great time.

Love, LOVE the colors you're using!