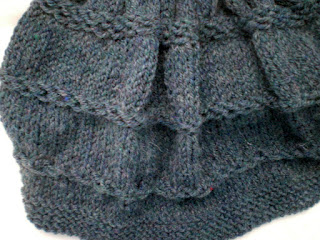 This is what I've got done so far on the kimono-style cardigan we're knitting in my class: have to finish the back piece by Saturday. The raised horizontal-stripe pattern makes a nice break in the (sometimes tedious to knit) stockinette stitch; although I've done three stripes so far, none of which look the same! I should tear it all out and start over ... but I can't do it: I know I'll never redo it, so, since it's the back, I'm just plunging ahead.
One reasson I can't redo are my other time-sensitive projects. This wrap for Peter's son's fiancee; the shower's in two weeks and the wrap is taking longer and requiring more yarn than I anticipated. This is all stockinette, but I wanted something without texture since the handpainted yarn is so variegated. 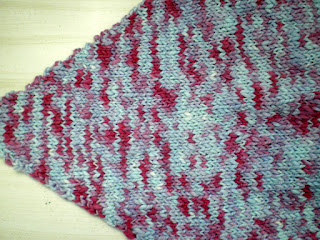 Then there are these two baby blankets, for Peter's daughter. She's not due till the end of August, but I have a long way to go on these. The yellow one is a pleasure to work on, but the other ... I substituted another, lighter weight, yarn for the one called for in the pattern and am learning (the hard way, of course) the perils of making substitutions: this is going to require a lot more stitches and thus time than it should; and the bump pattern--a row of knit 1, purl 1, then a row of purl 1, knit 1--is awkward to accomplish, moving the yarn back and forth for every stitch, for a beginner like me. 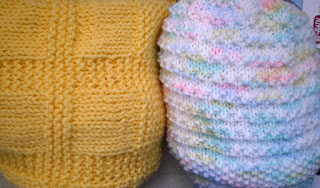 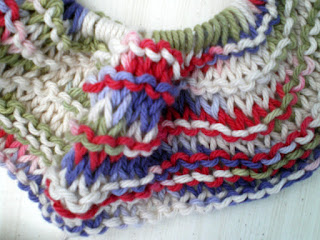 This is another project where I made an ill-advised substitution. Another throw, in light cotton, meant to be a birthday present for a friend, so I have until June ... Stalled on it right now, but if I don't get far enough for it to be a throw, I think I'll sew it up around a pillow form!
And these are the projects--along with a barely started black chunky ribbed wrap for me and a cowl in a luscious plummy purple edged in bright green--that I've had to put aside: sampler scarves from my first knitting class. I had bought the green cashmerino ahead of time but when I registered for the classs was told it was too heavy, so I bought the (slightly) lighter maroon yarn and started the project with it. As I went on, I didn't see why the green wouldn't work, so I started knitting it up too. Now I have two 1/4-done scarves. 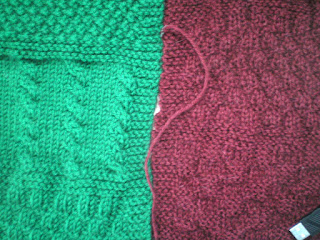 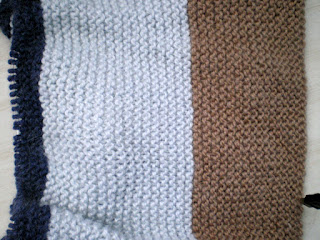 And finally, yet another throw, this one for my dad. It's all garter stitch and bulky yarn, which means it should knit up quickly, when I get to it. Each stripe is one skein: camel, sky blue, dark blue ... then cream, maroon, heathered brown, sap green. That's the plan. 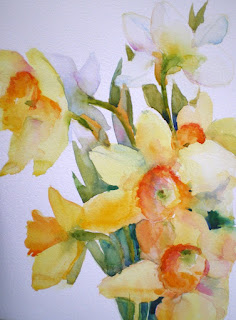 (9x12)
It seems to happen every year: the magnolia, forsythia, and daffodils are all in bloom, but every day my painting time is reallocated to do some other unavoidable and necessary task or other ... making me more anxious watching petals fall from the magnolia! 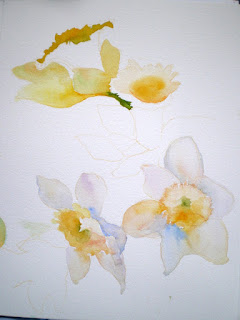 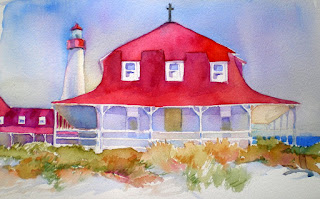 (7x11)
St Mary's By-the-Sea is a retreat for nuns on the best piece of real estate on the Jersey Cape. I've painted it many times; it's distinctive red roof never loses its appeal.
Last summer the nuns agreed to let a class paint from their porches; then when we got down there (about 15 of us), they reneged! Worried about liability they claimed, their allegiance being more corporate than christian. 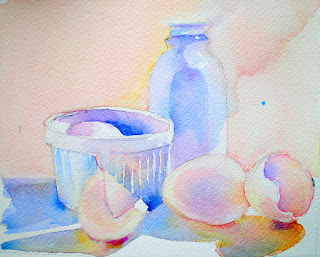 (7x10)
From a reference photo at DPW.
I couldn't get this photo to appear as it really is: it's a bit too dark here ... which unfortunately really shows up how I overworked the shadows under the eggs--couldn't get that "glow" right. I think I was struggling between what I saw--light--and what my brain told me should be there--dark (i.e., shadow).
I'll do it again--and this time tell my brain to butt out!