didn't/wouldn't upload.
I used a different photo software program, and here they are ... with a page of (out-of-focus) 5-minute poses of Ruth. 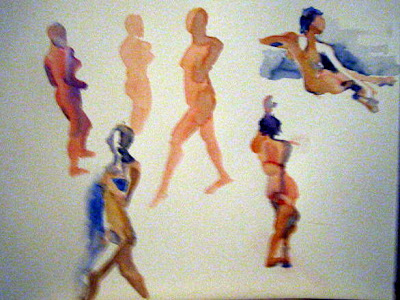 This morning our model, Ruth, was late because of the snow and ice

, so Bonnie modeled for us until she arrived, giving us a chance to concentrate on the head.
When we critique classmates' paintings when the model's on break, Bonnie always begins by asking us what we like about a painting. Here, I like the light on the hair and the left cheek, the lips ... the way they fade. Problems: the ear's too small, which I think I can slightly remedy; the eyes are too close (not fixable); and I got confused about the shape of the bottom plane of the nose, which I suppose I could try to fix, but I don't want to go in and start lifting and redoing areas, because that might ruin what's probably the best thing about it: it's a sketch, it looks un-labored-over, and that's more important to retain, to me, than "fixing" everything I can identify as "wrong" here.
I'll just leave it alone and try to observe that shape more accurately next time.

We did a long pose with Ruth and Bonnie asked us to think about breaking up the background into shapes ... This isn't finished, but I can work on it at home. A few problems to fix here--the left foot, the left arm, which looks hiked up or stiff (not sure this can be fixed, actually)--and some areas to finish--the hair, some cast shadows.
But I already feel disappointed with this effort, since it's so similar to my last painting of Ruth but, to my mind, not as good a painting ... there's something clunky about the torso, and I'm reluctant to add more washes there.
Maybe once I get her hair on (!!!) I'll see it differently. Don't know why I didn't paint the hair when I put the first wash on the face. Face and hair should painted at the same time, letting the paint mingle or run (a bit) to avoid making the hair look like it's sitting on top of the head. 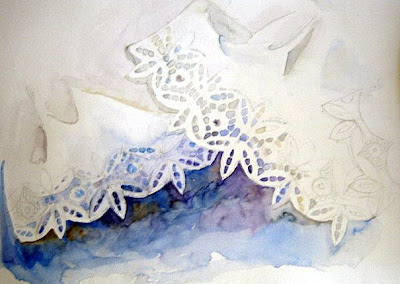 Took another try at the battenberg lace yesterday; this is an improvement on the first go, but still a little clunky, I think. Another practice session may be called for ... Working on this--with the very light washes for the folds of the cloth--I could see doing a small series of limited-palette paintings of different lacy white clothes. On very large paper, a full sheet (22 x 30) say.

The Chester County (PA) Art Association is having two shows, opening 3/2 and 5/25, the first juried, the second not, and I'm going to try to enter them both. It's been a long long time since I entered anything in a show or sold anything, and there is a school of thought that you have to show your paintings to really grow ... I'll post the paintings I'm considering. 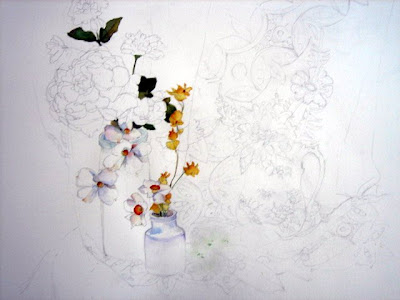 Arranged a new still life setup in Berwyn Thursday.
I had nothing in mind particularly, except that I wanted to use my battenberg lace curtain ... Somehow it wound up being all pinks. But it doesn't bother me.
I finished the drawing (which is a little tight; I'm hoping to disregard the finer details when I start painting, especially on the large peachy-colored rose) and thought I should start painting with the yellow orchids and little daffodils, so that I don't lose them; I think the yellows will end up being an important relief from the pinks.
Thought I should do a practice run of the lace. And, as you can see, it's a good thing I did!
I've only painted lace twice before and both times, I can see now, I made the
same mistake, of painting the holes too dark. It has to be way more subtle.

I think I will also have to break with my usual practice of just painting my way across the paper in a trance and actually plan where to make a lot of the lace and where to let it sort of just fade away ....
Anxious to work more on this one, but missed this week, 2/2, due to the bronchitis! Will take this as a chance to practice the lace again. 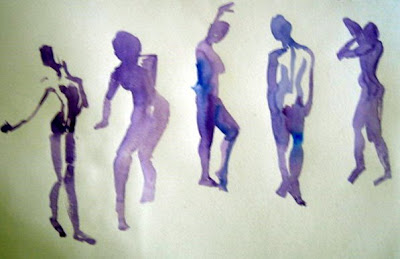 Day 2. The model was Ruth, who took some--from my view--very challenging, active poses. Ruth should model for anatomy classes: you can see every muscle and bone; there is not an ounce of fat on her anywhere. 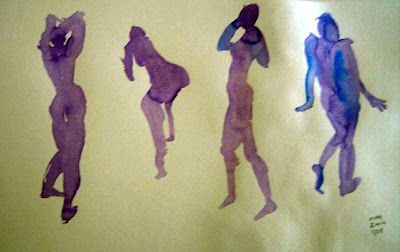 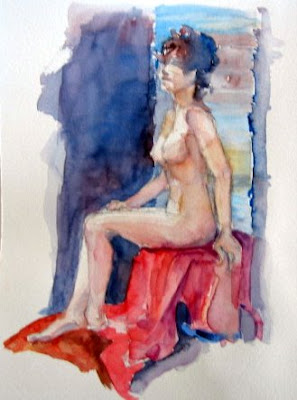 The 2-minute poses were largely brain twisters.
The 20-minute pose I should have spent more time drawing ... Ruth does have a largish head--or maybe it's just all that hair--but I think I made her look a little too "caveman" here; the stick she's holding doesn't help!
I'm not a big fan of props as a rule ... they look too contrived.
I'm generally not concerned at all about getting a likeness of the model; I just want a fair facsimile of a human, first, and some interesting painting or paint handling, a close second.
After being not too pleased with the short poses (which usually produce my favorite work), I wound up being pleased with the final, long pose (which I usually dislike doing). The head is not overlarge or coarse-looking (Bonnie pointed out to me that I had her chin too prominent; a very small correction made all the difference!), and, except that it's overpainted (which you can see better in person than here), it's not bad! I especially like the light on the left shoulder, the right shin, and the flat of her stomach. The darks could be darker, but I don't want to fuss with it any further.
As Chris would say, It's good enough.

Mike: Per your request--larger pictures! 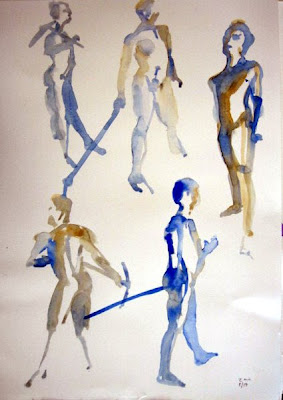 1/17/07 was the first session of this winter's life drawing class at Wayne with Bonnie. I got there late (!) and so missed the model's name ...
It was a bit intimidating and frustrating, having missed nearly all of the fall semester.
Trying to remind myself it's the process, not the product.
A good-sized group this session, and good painters too.
Bonnie has asked us to bring in paintings we're working on to critique during the model's breaks. I think it's a great idea and look forward to seeing people's work and also, I hope, honing my critical skills.
Of this day's paintings, my favorite is the middle figure on the 2nd sheet ... I think I like how some of the forms are "open"--there's no line or shape separating them form the background ... Have to try to do that on purpose! 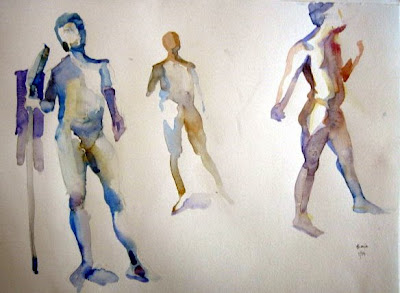 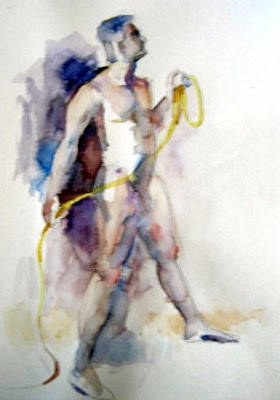