"this be the verse"

"Don't learn how to do things, keep on inquiring how." -- Hawthorne on Painting 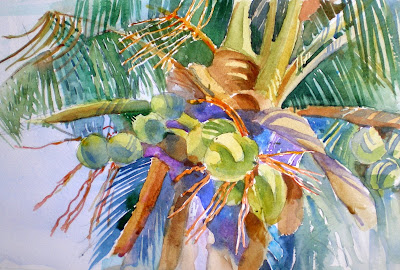 (11x15)
Ta-da. I took this picture outside, which really helped brighten it up. Naturally, I'm not entirely happy ... but last night I happened on the quote from Charles Hawthorne, above, so I have my "out."
Mostly, I think I just went a little overboard with the fronds! And I kind of lost the tree trunk, but that can be fixed.
In the spirit of "inquiring," I did these two little studies too. 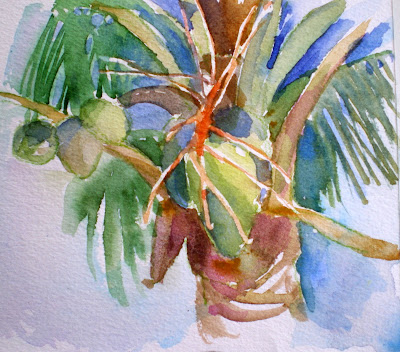 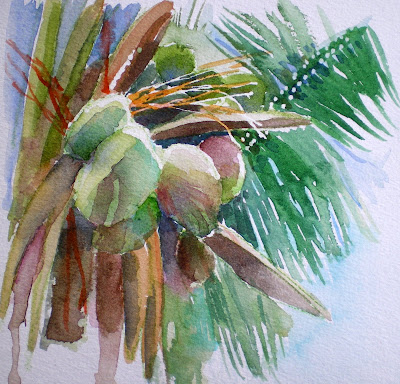 (5x5)
In honor of Mother's Day, a poem you'll never find in a Hallmark card.

Philip Larkin - This Be The Verse

I love all the blues and purples in the top one :D

LOl at that poem :D its perfect (and something to recite to people when they bug me about having kids :p)

sorry about not having kidspenon

Oh man! I've never seen that poem. I always liked "Church Going." It's really wonderful, and I want to thank you for posting it, especially for Mother's Day, when there are way too many greeting card sentiments.

You can never have too many fronds!

Mother's Day is designed to remind us of our shortcomings in either being a mother or being her child.

Beautiful painting and studies. Oddly enough the person who taught me that poem is my mother -- and she never swears. She thought it was funny and especially loved the line 'Man hands on misery to man".

Have a Happy Day,

I love your inquiring mind, your coconut studies and paintings, and I love that poem! ha ha A true picture of many childhood memories!

Laura, coming from someone who has lived in Florida most of her life I say your coming right along with your palms. I've seen so many paintings of them in the Keys, (Our closest friends live in Tavinier(Islamorada) and yours is right up there with the best...

Oh, my, I really enjoyed your poem! I'd never heard it, but I've often wanted to write such a poem. Just loved it.

Your painting finished up beautifully! The coconuts really stand out.

And I like your fronds and coconuts with the blues and purples very much!