"his self and the sun were one" 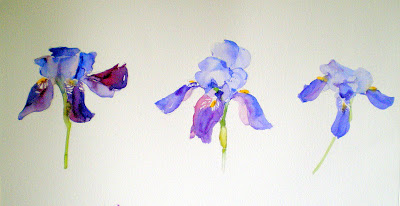 My iris was fast sinking in upon itself, so I did these practice sketches just to make having picked it worthwhile.
There's one in full bloom right now in the yard (for some reason, I get lots of foliage, not many blooms), but I hesitate to pick it as I won't have much time to paint this week.
May 11-15 is my workshop in Rehobeth, DE, and I have two jobs to complete before I go ... not to mention all the other things, beside painting, that one must do!

Thank you everyone for your comments and well-wishes on my little exhibit. I haven't been over to see it hung yet; feeling a little trepidation, but I'll go in the next day or two.

Even though National Poetry Month is over, you can still receive a poem a day from the American Academy of Poets at Poets.org.
For some reason the middle stanza of this poem came to mind today ...


The Planet On The Table

Ariel was glad he had written his poems.
They were of a remembered time
Or of something seen that he liked.

Other makings of the sun
Were waste and welter
And the ripe shrub writhed.

His self and the sun were one
And his poems, although makings of his self,
Were no less makings of the sun.

It was not important that they survive.
What mattered was that they should bear
Some lineament or character,

Some affluence, if only half-perceived,
In the poverty of their words,
Of the planet of which they were part.

You always manage to achieve a wonderful transparency in your work - just as watercolors should be. The Iris sketches are nice.
Jean

You do have an accomplished skill with transparency!

Best wishes with your upcoming workshop and with your exhibit. Isn't interesting how the banal activities of life try to keep us from the really fun part--getting into the studio?

Your irises are beautiful, Laura! I agree--that's what I love about watercolors--the transparency, and when someone's successful at communicating that, it's marvelous. You succeed over and over. Lovely.

These are so glorious. You have captured the flower in all of its glory. These paintings talk about the excitement of spring with all of the flowers coming back to fill us with wonder.

You are a fabulous painter. And thank you for the poem. I do feel a bit like I'm in an English class that I've been longing to take. I teach it, but we never soar this high.

I really enjoy visiting your blog! Your irises are lovely!

Oh these are gorgeous!!! Can't wait for my iris to bloom!