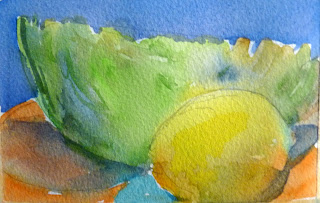 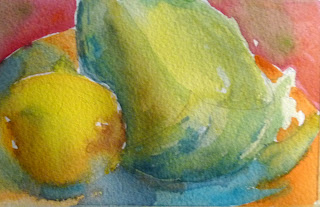 (2x3)
I got the idea to do setups like the one with the cantaloupe and lime, but using other objects that would reverse the color relationships: instead of an orange wedge, a green wedge of iceberg lettuce; instead of a teal plate, and orange plate.
The result, in these two, is a more high-key painting (the actual lettuce is even more blah than it looks here!). I'm timid/uncertain with yellow, and with making a cast shadow on an orange object: I want to keep some pure color, and not end up with a gray mass.
In the next two I think I'll try to make more of the orange plate. 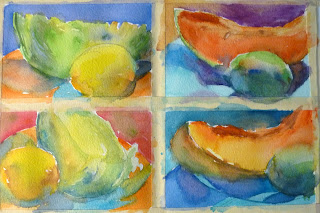 So far this summer has very wet--it rains nearly every day!--and that has triggered my asthma (I had to miss yoga last night--wah!); now I seem to be coming down with flu. Trying to keep painting--the idea for these little studies came along just in time. Thanks Annelein!

Wow, Laura--great exercises, and so nicely done. I love your treatment of these. I think yellows and greens are both hard. Hope the sun moves in soon for you!

Just love watching you play with colour (and not just a bit envious as I'm ploughing through my digital colouring-in). Hope the asthma and flu back off and you can get back to yoga!

I love the beautiful clean colours you produce. When I first saw the thumbnail for this blog post, I thought 'Oh good, she's substituted a honeydew for that awful cantaloupe,' before realizing it was a lettuce wedge. I'm glad you kept the lovely orange colour, though. And if you're still experimenting, I hope the purple shows up again.

These are beautiful. I hope you are not getting the flu. Super work. Be well and keep painting.

A great way to learn color theory. You are very methodical in planning your paintings. Really nice and interesting results. Thanks for sharing.
Jean