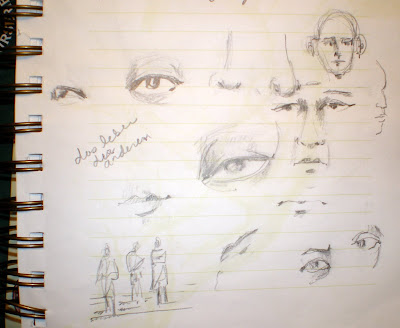 Last night I watched The Lives of Others, a German film that won the Academy Award for best foreign film last year. It's a great movie: the effects of careerist state surveillance on three people, one of them being the watcher; the power and necessity of art is a powerful subtext. I made these doodles with what I had to hand--a nearly empty mechanical pencil, on the bottom of a page with a PB brownie recipe on it! I was struck by the three main actors' faces! I'm very poor (very poor!) at drawing a moving object, but their faces were so beautiful and expressive, I had to try. I think I'm learning, with noses, the less done, the better. 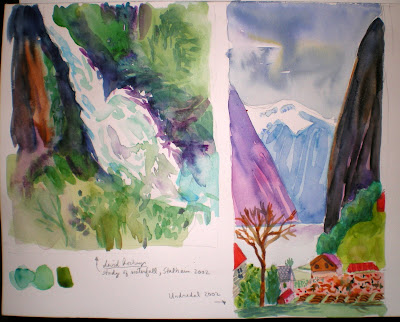 Today, with not much room or quiet (ongoing construction!), rather than attempt something of my own, I copied these watercolors of David Hockney; they're both of scenes in Norway. I love everything by Hockney! Working on these I felt how much control there is in his seeming nonchalance!