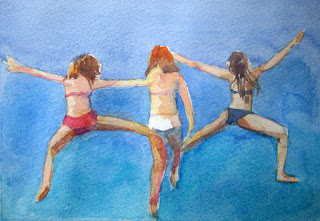 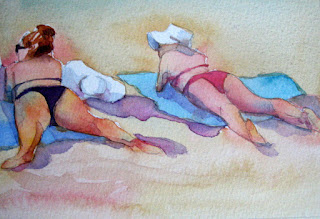 (5x7)
Looking through my reference photos to make a few smallish pictures to donate to a raffle next month to help out one of my high school English teachers who is very ill. He was just out of college when I was in HS, and for many years directed the school play ... being involved with which was the only entertainment here in the winters back then. I never tried out for a part; I painted scenery ... and thus had entree to the nightly parties.
I think I'll have to do these both over.
The one of the three girls on heavier paper: this is 90lb., which I thought would be okay because my idea was to "get it" in two washes. Next time, I think I'll give the middle girl a left arm! (She's probably holding her nose!)
The one of the two sunbathers (which is from Daily Paintworks challenges) doesn't feel lightstruck enough to me: next time I'll try leaving more white and maybe using hotter colors in the shadows. 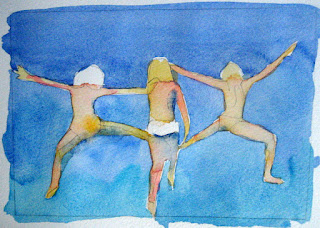 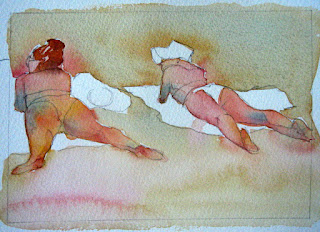 I love the jumping girls, it's so lively! I like the missing left arm, it begs for explanation, a story. Especially since you can't see what they are jumping into.

What a lovely thing to do.

Amazing watercolors, I am sorry I turned into slow blogger and my visits are so rare. What a pleasure to slowly scroll down your blog page!!!

Love these and the discussion of how you're working. So cool!

sun bathers are great ...love the composition of the 3 swimming