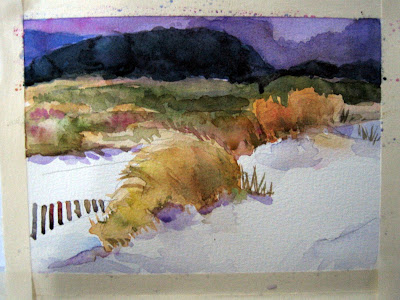 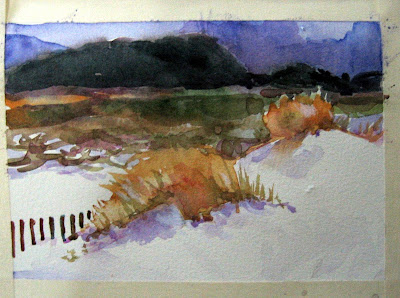 Putting these aside as done for now. I was trying for a more neutral palette (!)--but neutrals built from mixing or overlaying colors, rather than from the tube. When it comes to neutrals, though, looks like I need to stick to to the tubes: when I put down a violet or yellow or blue, I don't want to lose it!
May try, as Sue suggested, a limited palette, a good exercise though one I don't subject myself to often enough--I usually jump in without a plan: sometimes it works, sometimes it doesn't. But I have found, in classes and workshops, that having some restraint imposed on your usual habits can produce wonderful results.
I'll give some thought to which colors to use and try to done another over the weekend.

This scene of a road in Delaware County will be the next subject in this flurry of little studies.